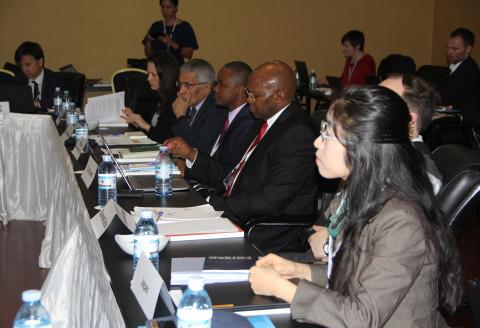 The 17th Steering Committee meeting of the Global Partnership for Effective Development Cooperation has been concluded at Speke Resort Munyonyo.

The Minister of State for Planning, David Bahati opened the two day meeting on Tuesday on behalf of the Minister of Finance, Matia Kasaija.

Uganda was subsequently endorsed by the Partner States through the African Union to be the co-chair representing recipients of development cooperation of the Global Partnership. The other co-chairs are the Finance Ministers of Germany and Bangladesh.

Global Partnership for Effective Development Cooperation (GPEDC) was established in 2011 and brings together governments, International Organizations, Civil society and the Private Sector to ensure that all development resources are used as effectively as possible.

“Uganda has been a firm believer and advocate of development effectiveness since the inception of this Partnership,” said Kasaija.

The Kampala meeting (26-27, March) focused on preparations for the 2019, Global Partnership Senior level meeting which will take place in New York on 13th and 14th July, 2019 on the margins of the High- Level Political Forum on Sustainable Development.

The meeting also considered the proposed monitoring approach for fragile and conflict-affected situations and endorsement of the private sector engagement principles and guidelines.