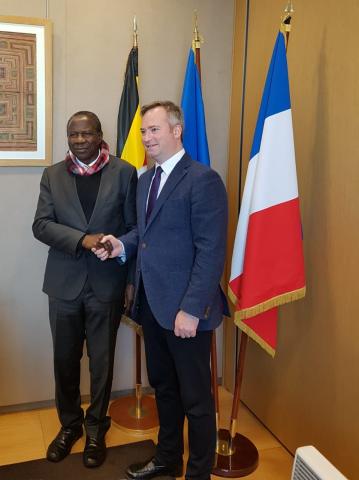 Finance Minister Matia Kasaija has urged French investors to choose Uganda as their Investment destination to take advantage of the conducive environment put in place by the Government of Uganda for investors. Inviting the French Investors, Kasaija said Uganda has created a one stop centre for investors at Uganda Investment Authority (UIA) where 12 Government agencies are under one roof to enable potential investors get the necessary investment requirements and clearances in the shortest time possible. The Finance Minister made the remarks at the France-Eastern Africa Business Council in Paris, France chaired by the Movement of French Entrepreneurs Chief Executive Officer, Philippe Gautier. The conference was organized to moblise and enhance French investments and trade partnerships with Uganda. Kasaija’s visit to France is a follow up on the visit by President Yoweri Museveni to France in 2016 and a reciprocal visit by the French investment delegation in 2017 which resulted into some French companies investing in Uganda. “Uganda’s economy in the medium term is projected to grow by 7% and in FY 2017/2018 our economy grew by 6.1%. Our GDP is projected to grow to USD 30 billion in FY 2019/2020 from USD 27.4 billion of FY 2017/2018,” said Kasaija, adding that headline inflation has always remained at a single digit position and is currently at 2.7%. Kasaija called upon French investors to take up investment opportunities in Uganda especially in the areas of Agriculture, Energy, particularly renewable energy, Tourism,Pharmecuetical industry, Oil and Gas as well as Minerals. “I would like to reiterate my President’s desire of the need for investors in the production of industrial sugar, industrial starch and medical gauze,” said the Finance Minister. He said these investment opportunities are supported by a strong macroeconomic environment, availability of raw materials, good tax regime, and availability of labour force, liberalized economy and untapped regional markets in addition to improved supportive infrastructure like roads, power and water supply. Some of the French companies which have already invested in Uganda include; Total in the Oil sector, Ballore in the Logistics sector, Lafage in Cement and Engie in Solar energy. Philippe Gautier on behalf of the Movement of French Entrepreneurs invited Uganda to participate in the Annual French Expo due in November 2019, to promote Uganda’s tourism potential, trade and investment. He also pledged to continue mobilizing the French private sector to come and invest in Uganda.