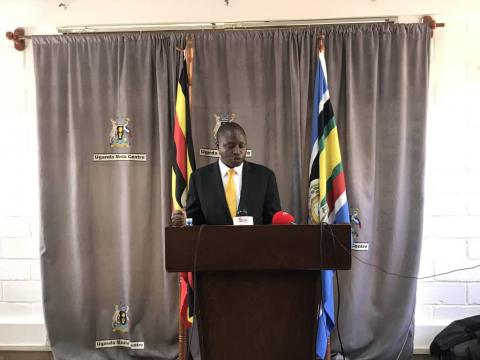 As you may be aware the Second National Development Plan (NDPII) will expire in June 2020, this implies that the NDPIII should be in place by May 2020. The NDP III is the third in a series of plans that aim to implement the Uganda Vision 2040 aspirations. In this regard, Cabinet on 9th September 2019 approved the strategic direction for the NDPIII.

The strategic direction is the principle guiding framework for Sectors and Local Governments in the development of their plans. It also enables NPA to engage the decentralized planning institutions (Sectors, MDAs and Local Governments) to identify priorities that will eventually be consolidated in National Development Plans as required.

Preliminary findings of the Midterm review of NDP II and final evaluation of NDP I, as well as synthesis of other studies on performance under NDP era (effective FY 2010/11) highlight several achievements and challenges. These include:

4) Due to the NRM Government’s efforts to attract direct foreign investments, factories have increased from around 86 factories in 1986 to around 4600 currently. Several industrial complexes are emerging in Namanve, Mbalala (Mukono), Kawempe, Matuga and other areas. Factories have been set up in food processing, iron and steel, ceramics, plastics and batteries and many others. The number of cement factories has increased to four (4) operational plants in the Country with a fifth (Sinoma Cement factory in Mbale) being planned. In addition, Government has designated 22 areas for establishment of serviced industrial parks.

9) Following the introduction of Universal Primary Education, gross enrolment in primary school increased from 3.1 million in 1996 to 7.6 million in 2003 and to 8.8 million in 2018.

10) Significant progress has been made in delivering key NDPII flag ship projects. For instance;

• The Isimba hydro power plant has been completed and launched,

• Karuma is undergoing testing before it becomes operational,

• The Albertine region roads, Olwiyo-Gulu-Kitgum-Musingo and Kapchorwa-Suam roads are on schedule,

• National Grid Extension including the Regional Power Pool is on schedule,

• Road Construction (Earth Moving) equipment has been completed and launched,

• Phosphate Industry in Tororo is on schedule with phase 1 completed and launched,

• Markets and Agriculture Improvement Project is on schedule with Phase 1 subprojects completed & launched,

• Farm Income Enhancement and Forest Conservation is on schedule,

• The Entebbe Airport Rehabilitation is on schedule,

• ICT National Backbone Project is on schedule with Phase 4 completed,

• Renovation of 25 Selected General Hospitals is on schedule and due for completion by 2019,

• Construction of Kabaale international airport-Hoima is 5 months ahead of schedule.

Despite the achievements so far, understanding and addressing challenges is important to focus the next phase of planning. Therefore, the following challenges define NDP III focus for the next 5-10 years:

1) According to the Population Census, 2014, a large proportion of the households (68.9 percent) obtains their livelihood from subsistence farming. They are self-employed in own farms and consume almost everything they produce. They are disconnected from the market and its benefits. NDP III has to strategize to reverse this scenario.

2) Youth bulge (78% of the population are of age 30 years and below, representing 31.2 million people) creates both an opportunity and a challenge. It creates an opportunity because of the potential demographic dividend from cheap labor and future demand. However, if the youth bulge is not well planned for, it creates a challenge and potentially missing the demographic dividend.

3) There is slow implementation of government projects especially because of delays in procurement.

Based on the achievements, challenges and lessons learnt from implementing the NDPs, NDPIII will build on the gains to provide the national strategic direction for the next 5 years.

In developing the NDP III, the National Planning Authority (NPA) is holding consultations with various stakeholders. The thrust of the NDPIII will be to reduce the subsistence nature of our economy through industrialization. Therefore, the goal of the NDPIII will be “Increased household incomes and improved quality of life” while the theme will be “Sustainable industrialization for inclusive growth, employment and wealth”. This will be achieved through 5 key objectives.

a. FIVE OBJECTIVES OF NDP III

2) Strengthening the private sector to drive growth and create jobs,

3) Consolidating and increasing the Stock and Quality of Productive Infrastructure,

4) Increasing Productivity, Inclusiveness and Wellbeing of the Population,

5) Strengthening the role of the public sector in the growth and development process.

To achieve the five objectives, and effectively and efficiently implement NDPIII, several development strategies have been identified through the reviews and consultations that were recently concluded.

1) Maintaining Peace, Security and Good Governance. This is the bedrock upon which development can thrive. The stability so far achieved will be sustained and zealously protected.

2) Maintaining stable macro-economic environment as an anchor for economic growth and development. Beyond inflation targeting and forex management, emphasis will be on increasing savings, investment, capital formation and lowering commercial bank interest rates.

3) Reducing the cost of doing business to attract foreign direct investment (FDI) and enhance competitiveness of domestically produced goods and services, both at local and international markets. Priority will be on reducing the cost of power, transport, internet, money, improving business processes, and zealously fighting corruption.

4) Import Replacement and Export Promotion Strategy. An import replacement strategy will be adopted to promote labor-intensive light manufacturing, cottage industries, heavy manufacturing for job creation and technology importation with the major objective of creating jobs for the youth. This will be key to build a sustainable export-oriented economy. Uganda is endowed with vast raw materials that could help replace major imports such as; Petroleum, petrol products and related materials, Cereals and cereal preparations, Iron and steel, Fixed vegetable fats and oils, crude, or refined, Paper, paperboard and articles of pulp or paper-board, Medical and pharmaceutical products and Plastics in primary forms.

5) Commercialization of agriculture to generate sufficient production volumes to sustain domestic (food security) and external markets. It is critical that we commercialize agriculture and agro- industrialize if we are to reduce the poverty levels in the country side especially in the Eastern and Northern regions of the Country.

6) Harnessing the Tourism potential. This is an area with quick wins, and in the NDPIII we propose to have a hybrid of both elite and mass tourism. We will focus on tourism skills, tourism infrastructure including water, land and air transport, as well as accommodation facilities especially in the least tapped areas. Branding and Marketing Uganda will also be part of this package.

8) Mineral Beneficiation and Oil refining. This will involve fast tracking the extraction and processing of confirmed minerals and exploration of minerals whose quantities have not been explored but highly suspected to be existent in Uganda.

9) Revisiting the role of the Government in strategic areas of the economy. In order to spur balanced growth in the country, and in the spirit of promoting Public Private Partnerships and quasi market approach, it is proposed that government deepens its role to stimulate development.

10) Promotion of Private Sector Investment (Domestic Investment and Foreign Direct Investment). This will be done through maintaining macroeconomic stability, provision of long-term finance at affordable rates, reduction in the amount of domestic arrears and putting in place mechanisms to ensure that the costs of doing business in Uganda are kept low as well as strengthening the use of PPP arrangements. Branding and Marketing Uganda will also be key in this effort.

12) Exploiting opportunities of Urbanization to drive growth. This is important because 65 percent of non-agriculture GDP is generated by the Greater Kampala Metropolitan Area (GKMA), with Kampala generating 31 percent of the GDP. This potential needs to be harnessed.

13) Improving the wellbeing and productivity of the population by improving the quality of education and health service delivery; reforming vocational education; and increasing social protection through initiatives like health insurance schemes.

14) Increasing Domestic Revenue Mobilization Domestic revenue will be our main source of financing for NDP III. There is more potential, and significantly more revenue can still be generated through more efficient and effective tax administration by enforcing compliance and reducing tax evasion.

15) Promotion of Social Services based on the Parish Model. As we consolidate delivery of social services, it is recommended that the Parish becomes the Planning and Implementation Unit.

16) Climate change adaptation and environmental management. This strategy will focus on addressing issues of sustaining the rising population while addressing and managing the effects of climate change on livelihoods, incomes and prosperity.

These strategies will be implemented in a programmatic approach that strengthen sector synergies towards realization of common results.

1) Although significant consultations have gone into the development of the NDPIII strategic direction, the NPA will embark on the next phase of wider nation/sector wide consultations to draft of the plan. In particular, programs that are required to achieve the strategies above will be development in a participatory and consultative process.

2) To guide sector and MDAs planning process, the NPA will issue a planning call circular to guide the development of Sector and Local Government plans that are aligned to the NDP III. These plans will be synchronized to meet the general direction of the Uganda Vision 2040.

3) Validation engagements for the plan will also be carried out nationally to ensure that all citizens concerns have been incorporated in the plan.

As you may be aware the Second National Development Plan.pdf