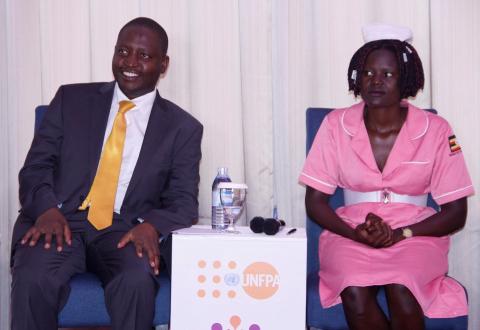 The Minister of State for Planning David Bahati has on behalf of Government commended the United Nations Population Fund (UNFPA) for the technical and financial support extended to Uganda to ensure that the recommendations of the 1994 International conference on Population and Development programme of Action in Cairo to which Uganda is a signatory are implemented.

Bahati made the remarks yesterday while launching the State of the World Population Report 2019 entitled, “Unfinished business: the pursuit of rights and choices for all.” on Thursday at Golden Tulip hotel in Kampala.

The Minister said the number of mothers dying during childbirth has reduced by 24% in the last five years from 438 to 336 per 100,000 live births.

“ Even though there is still much to be done to realize reproductive health and rights for all, certainly the situation for women and young people today is much better than it was in 1994,” said Bahati.

He applauded the midwifery training bursary and bonding programme funded by Sweden through UNFPA which has trained 590 girls from hard to reach districts to become midwives.

The latest figures contained in the 2016 Uganda Demographic and Health Survey (UDHS) reveal that 7 women in Uganda out of 10 deliver with assistance from a skilled birth attendant, mainly a midwife. There has been also a steady increase in the number of married women using modern methods of family planning from 26% in 2006 to 35% in 2016 (UDHS,2016).

UNFPA Country Representative Alain Sibenaler, called for collective responsibility stressing the fundamental right of every one to live in dignity and to realize their potential regardless of gender for the good of society.

UNFPA was established in 1969 to advise developing countries about the social and economic implications of population growth, however millions of women today still face economic, institutional and other barriers that prevent them from making their own decisions on becoming pregnant.