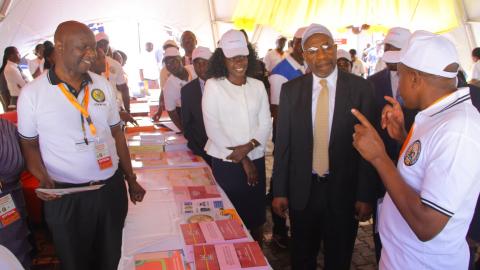 The three day national budget month service excellence exhibition for FY 2019/20 that ran from 5th-7th June has been successfully concluded at Kololo ceremonial grounds with over 120 Government Ministries, Departments and Agencies and more than 17 civil society organizations showcasing their products and services.

The Minister of Finance, Planning and Economic Development Matia Kasaija during the flagging off of the March called upon the public to come to Kololo for the exhibition to see how their taxes are spent by Government ministries, departments and agencies, adding that they should also pay taxes to improve service delivery in the country.

“Today we are holding another activity to increase awareness and support for government programmes, improve accountability by government agencies and increase service delivery as we approach the reading of the budget speech,” said Kasaija.

The exhibition was officially opened by the Prime Minister Dr Ruhakana Rugunda who thanked the Ministry of Finance, Planning and Economic Development and all other partner institutions for increasing publicity and awareness for the national budget through activities of the national budget month for FY 2019/20.

“The ultimate objective of the NRM Government is to deliver Uganda to middle income status and I would like to note that we are on track to achieving this objective,” said the Premier.

He said the NRM Government is committed towards enhancing infrastructure in order to further lower the cost of doing business and to facilitate the private sector.

“In the infrastructure drive, the national paved road network has increased from 3,050 km in 2008 to 4,551km in 2017/18. Government will continue to support the improvement in the connectivity of rural roads which will lead to increased productivity and service delivery,” said Dr Rugunda.

He also said the Energy sector has progressed well with total installed electricity generation capacity at over 1,200MW.

Regarding social services, he said the health sector has increased universal health coverage with essential health and related services needed for promotion of healthy and productive life.

In the education sector, Rugunda said Government has managed to universalize primary and post primary education and over 92% of parishes have Government aided schools and the literacy rate has increased by 74% among persons aged 10 years and above.

He also noted that Government has continued to support agriculture by improving the agriculture value chain hence increasing agricultural production and productivity.

During the exhibition 2400 Ugandans received the yellow fever vaccine and 248 units of blood were collected.

Also over 3000 clients visited the wellness clinic, 400 clients sought the services of the women hospital and 143 people were screened for cancer among other services offered.

The Finance Minister thanked Ministries, Departments and Agencies that participated in the service excellence exhibition.

He said Government of Uganda has promoted budget transparency aimed at enhancing budget literacy and citizens’ engagement in prioritization, budgeting and oversight for poverty reduction interventions since 1998.

“The purpose of this exhibition was to inform the public about all the products, services and innovations that government agencies are expected to offer and give back to the public,” said the Finance Minister.

He said the exhibition has created and inspired in-roads in public ownership of the national budget and buy-in for government programmes.

“Going forward therefore, this activity will be held annually. I therefore urge all Ministries, Departments and Agencies to prepare adequately for next year’s exhibition,” said the Minister.