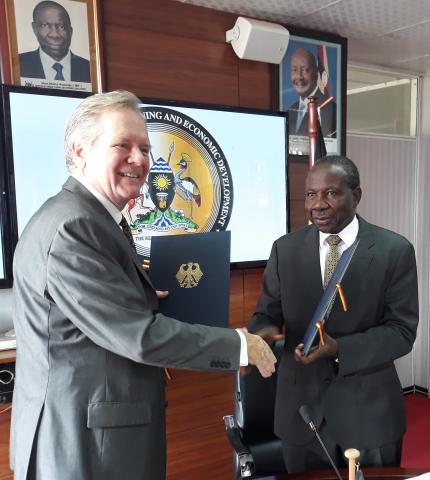 Finance Minister Matia Kasaija has on behalf of Government of Uganda signed financial and technical cooperation agreements with the Germany Ambassador Dr Albrecht Conze for the years 2017 and 2018.

The Financial and Technical cooperation agreements worth EUR 105,000,000 (one hundred and five million euros) and EUR 42,500,000 (forty two million five hundred thousand euros) respectively will support the sectors of energy, works and transport, water and sanitation, accountability as well as Refugee hosting communities.

Projects already earmarked for support include; Masaka–Mbarara power extension line, piped water extension from river Nile to Gulu and support to the Office of the Auditor General.

“I want to affirm your Excellency that we shall fulfil our obligations under the agreement. We shall ensure that the funds are properly and exclusively utilized by the Agencies for the projects earmarked,” said Kasaija.

The Finance Minister called for a reciprocal trade relationship between the two countries, noting that, it is the only way to develop a country.

“Aid cannot develop a country because you never know how it will come.

The priorities of government keep changing and may not match with the donors’,” said Kasaija.

Regarding Refugees, Kasaija extended gratitude to the Government of Germany for the commitment towards the refugee hosting communities.

The Germany Ambassador on his part applauded the long standing partnership with Uganda since 1964, adding that a number of development projects have been implemented and have contributed to the economic development of the Country.

The Ambassador said development support is temporary because no country remains a recipient of Aid forever.