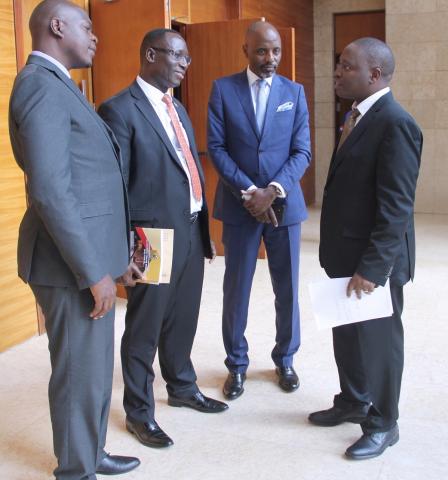 Minister of State for Planning David Bahati has said the NRM government will continue to ensure the right of access to education for all its citizens as clearly spelt out in the objectives of the UPE policy.

He said Government is pursuing a people centred development agenda because human resource is the greatest asset for Uganda.

Bahati made the remarks on Thursday, at the Office of the President Conference hall where National Planning Authority presented a comprehensive evaluation report on Universal Primary Education (UPE) Policy.

“There is empirical evidence to indicate that there has been an increased number of primary schools, teachers and growth in enrolment. Government is now focusing on improving the quality of education," said Bahati.

He said Government has allocated Ushs 1 billion in the budget of FY 2019/20 for the roll out of the early grade reading in all the districts.

Bahati said Government has invested more than Ushs. 2 trillion in the realization of UPE and USE since the inception of the programmes.

He said the sustained economic growth which currently stands at Ushs. 128.5 trillion (US$ 34.2 billion), will be able to adequately finance investments in human capital development and more specifically, universal primary and secondary education over the medium Term.

“Allow me acknowledge the support from the World Bank of US$ 200million towards the implementation of the Uganda Intergovernmental Fiscal Transfer Program for Results,” said the Minister.

According to the report presented by National Planning Authority Executive Director, Dr. Joseph Muvawala, 60% of the UPE objectives have been achieved.

About 93% of primary school age children in equal gender proportions are enrolled in school, compared to only 40% in 1986 and early 90's.

According to the report, the UPE policy has positively impacted on household incomes. Other wellbeing indicators such as completing 7 years of primary education increases household incomes by 10.2%.

The report recommends increasing UPE financing towards a per capita of UGX 59,000 for rural schools and UGX 63,000 for urban schools from the current range of about UGX 14,000.

The report concludes that UPE policy has been fundamental in achieving key educational goals since its inception in 1997.